The Trials of Dushara is a single-player level for The Elder Scrolls V: Skyrim. Players become the Outsider tasked with performing the ancient Khajiit ritual to secure passage back to Elsewyr. Multiple NPCs add additional lore through dialogue options help immerse the player in the world of Ephesus.

I also strived to create a unique, holistic world within the existing Skyrim lore. The narrative-focused quest required environmental storytelling and quest-specific lore that made players feel they were in a small pocket of the larger Elder Scroll’s universe.

I wanted to give players’ choices weight through their dialogue with other NPCs. Each dialogue characterizes the NPCs and the player’s responses change the narrative of the story.

I wanted to create puzzles that felt challenging, but intuitive. Identifying how to clearly communicate puzzle challenges to players became the central focus of this project.

1. Dialogue options should allow players to skip straight to the quest details, and treat lore options as supplemental and repeatable if necessary.

2. Trigger based puzzles need immediate feedback so players know when they are close to solving the puzzle. Puzzles should also have an identifiable pattern so players feel clever when they’ve figured that pattern out.

3. Weaving multiple quests together allows for unique player choices that makes each ending of a branching narrative satisfying from a narrative and gameplay standpoint.

As the Outsider, the main quest, Trials of Dushara, has players solve the trial’s three trials: Fire, Air, and Earth. Each trial represents the different phases of a Khajiit life: birth, growth, and eventually death. The main quest has two major endings: appeasing the self-proclaimed goddess Dushara or defeating her, and ascending to Godhood instead. The main quest has a cast of five characters that offer players additional dialogue to help inform their decisions. Players that don’t care about this dialogue can easily skip the dialogue, and run through the level.

The side quest “Sacred Treasures” linked with the main quest. Every trial was associated with a sacred treasure. Fire had the sword. Air had the mirror. Earth had the jewel. These treasures would come in handy for player’s who didn’t care about the Khajiit clan’s ultimate fate, or could not defeat Dushara through combat. The three sacred treasures would prove that Dushara was the goddess she claimed to be.

The inspiration for this quest was based on the legend surrounding the Japanese Sacred Treasures.

The major challenge and triumph of the level was creating interesting characters that would motivate players to complete the puzzle challenges. Players can choose or not choose to engage in combat, and thus, offers a very different experience from most Skyrim quests. Since players may never experience combat, dialogue and characterization within dialogue, was crucial to keep players motivated and concerned about the fate of the Khajiit clan.

Known as the Outsider, the player could choose to interact with each character and learn more about the world of Ephesus. Each character had different opinions about the ancient trials the player had been tasked to complete.

The Clan Mother Manat was supportive of the clan’s ancient rites, and trusted the player character calling him “Outsider.” As the tradition keeper, she had wealth of knowledge of general Khajiit lore based on the Skyrim’s wiki page.

Arash, the Blacksmith, was acerbic when it came to Dushara’s tradition. His interactions raised doubt about Dushara to the player. He handed over the ceremonial dagger anyway, but had seen enough bloodshed for his lifetime.

On their way to the trials, Bahadur, the Alchemist, stopped the player and asked them to acquire the clan’s Sacred Treasures. One of Dushara’s own agents, he knew the true identity of Dushara, but won’t reveal it to the player. While seemingly supportive of Dushara, he ultimately relies on the Outsider killing her.

I wanted to make Dushara, the self-proclaimed Goddess, feel powerful and mesmerizing, as if she was one-step ahead at all times. Her dialogue pushed for convincing the player to take her deal, and players avoided all combat by immediately choosing “peace/power” siding with her after the trials. However, the overall theme of the level was “subverting the status quo,” so her dialogue was over-the-top and could leave some players distrusting her words from the start.

As second in command, Dushara’s Second was straight-forward and sassy. Her dialogue revealed to the player that killing Dushara reset the cycle of the Trials. If players chose to kill Dushara, she approached them giving them another choice. Players could choose to become the next god, deny godhood, or ignore her completely. Since she was a side character, I gave her three simple responses: totally snarky, snarky-but understanding, or embellishing the reward of being a god.

As a formerly trained creative writer, I wanted to push my writing into the interactive space by allowing players to talk their way out (or into) problems. The main quest has 3 different endings that stem from player’s dialogue choices.

Defeat the Goddess. Become the next Dushara.

Players choose to either give their side quest weapons to the final boss, Dushara; to give them back to the Khajiit scholar; or to keep them for themselves (and not complete the side quest at all). Dushara demands player’s pick the first option, and rewards them graciously for doing so. If players don’t acquiesce, then they must battle her in combat—where they choose between enslaving the Khajiit to their rule (ascending to “Godhood”) or freeing the Khajiit from this ritual cycle.

Each ending had a different narrative impact on the clan, which solidified the player’s choice in the world, while still giving players the quest’s ultimate reward–an ancient Khajiit sword.

The Fire trial was a simple trigger-based puzzle of turning the flames that blocked the route off in a specific sequence. There were five buttons and five fires to put out. Players stepped in-between columns that would turn off a specific flame. If they stepped on the wrong button out of sequence, all the flames turned back on.

For this puzzle, I used Papryus to script a universal fire script that had separate functions for turning off the flames, turning on the “angelic halo effect,” and enabling the next button in the sequence to turn off their flames. Linked Enitites allowed this script to be placed on any one of the triggers and work.

before: The first fire trial was too condensed. Players were on even ground with the puzzle challenge. It was too easy to step on a trigger that would give a false positive. This edition also lacked sound effects and necessary cues to let player’s know they had hit the right button to turn off the flames.

after: This image shows how the player is on upper ground. They can easily see both the buttons that turn off the flames and when the flames have been turned off.

I wanted to expand on the previous mechanic of stepping on buttons and give it a new feature: shooting a magic spell. For this trial, players had to cast magic at three targets to break a magical barrier. This trial also locked players into the room. To give context to this puzzle, a placed a Norse corpse with a note that hinted at what the player needed to do. This corpse also referenced the Norse villagers explorer-players would have encountered on the outskirts of Ephesus.

The Air trial used a simple hit counter to determine if the player had hit a target, and would drop the magical barrier around the second sacred treasure–the mirror.

In the first image, the Air Trial did not have a clear target for players to shoot. Players also did not realize they needed to use magic.

In the second image, a literal target helped communicate “hit me.” The same button from the Fire Trial communicated players needed to step on it. When they did, a magic gust of ice shot forward. Players stepped on and off this button and used their mouse to aim at the different targets. I used this magic button in case players were not equipped with a bow or magic, so players all of all skill sets could complete the challenge.

This trial expanded on the traditional Pillar Puzzle already existing within Skyrim. I modified the script slightly to accommodate unlocking a door that would lead to another small world, the Grove of Dushara. This puzzle represented all the three trials together. Originally, each trial had a head of the pillar puzzle in each of the trial rooms.

While I did incorporate this for the final iteration, I found that it was best if players saw the Animal Pillars in order all at once. Otherwise, players felt frustrated back-tracking to previous trials. Having the animal heads and pillars in the same area communicated to players the precise order which would open the door. 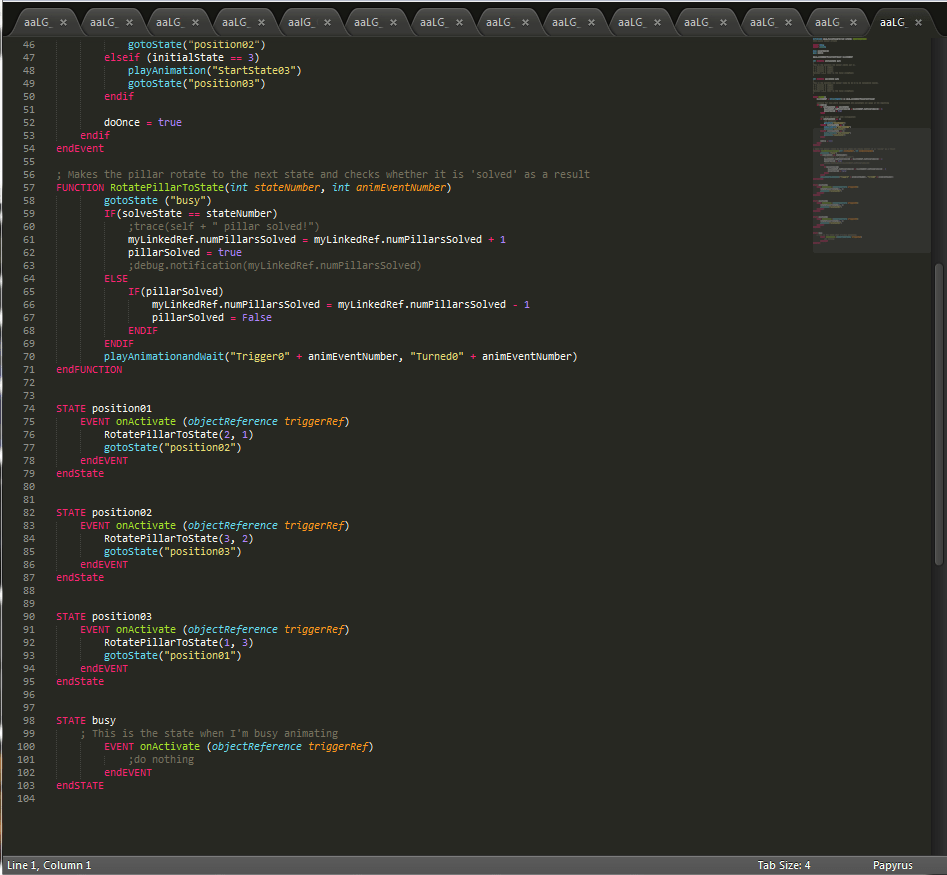