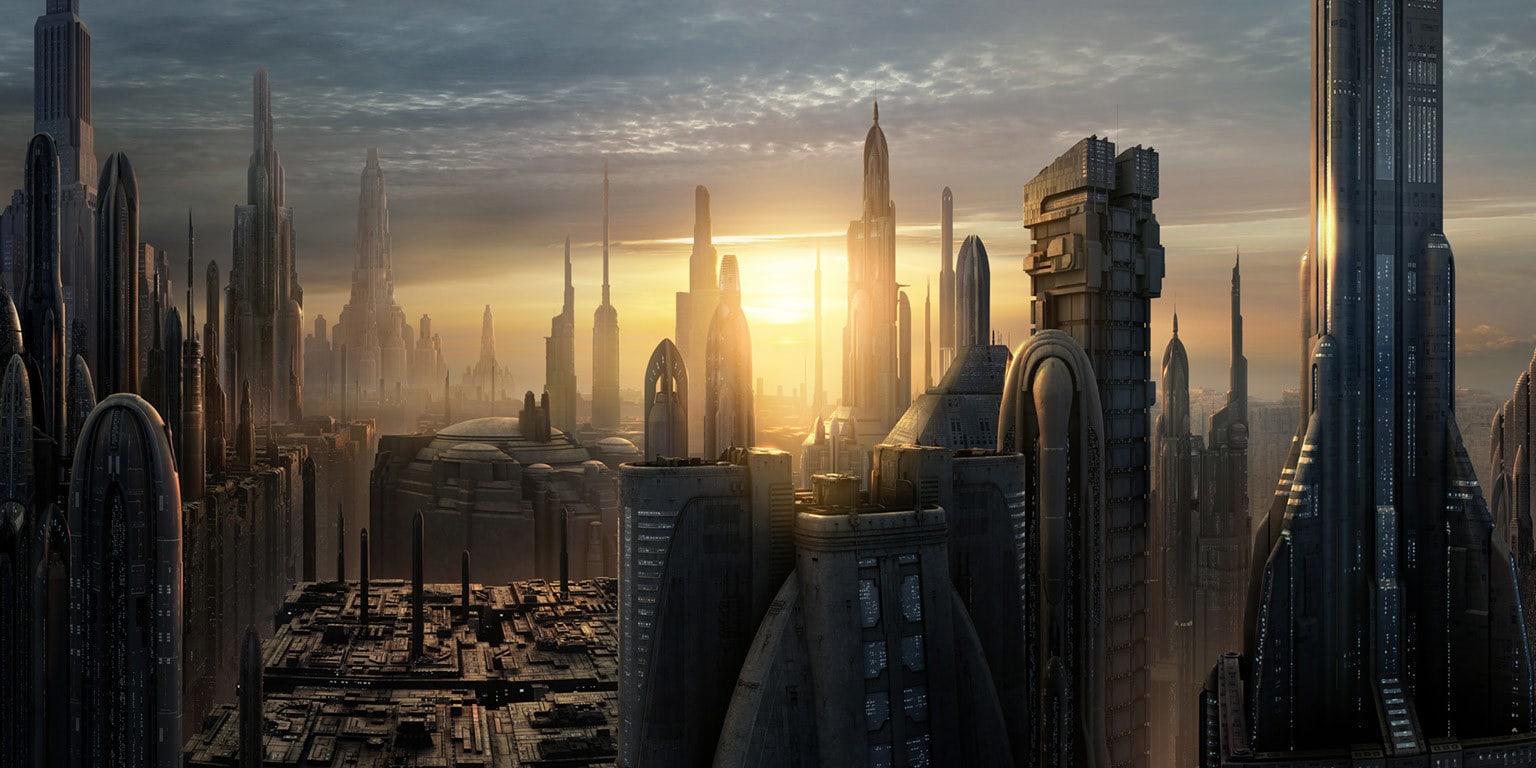 For May the Fourth & Revenge of the Fifth, I wanted to share the first chapter of my original character set in the Star Wars universe. Inspired by my Jedi Knight from the Star Wars: The Old Republic video game (may my account rest in peace, as I will never get it back), this story is set in the OLD REPUBLIC when the Jedi numbered the Sith 1:1 and the war of the modern movies was 1000s of years away…..

Coruscant was not so easily forgiving. Blaster shots and light saber swings, the underbelly was used to this sort of ruckus. But not from the Jedi, at least, not in a long time. Both their speeders had crashed somewhere in the traffic sky. They had narrowly escaped the bounty hunters through an old warehouse building, and looped back into the nearby industrial sector. They thought covering their faces and lightsabers would be enough to hide them. But here the locals were smart, and the gang leader smarter.

Despite the Republic’s topside control, here in the lower sector gangs ruled the streets and the Jedi were more of a nuisance than a savior. It didn’t matter where you came from. If there was a price on your head, someone was willing to kill you for it. Or worse, take you alive. Al Baba was the worst; and the Jedi had fallen right into her trap.

Tough didn’t even begin to cover it. Savrika walked through the central bazar dressed as plainly as she could. A hood covered her eye wraps, and loose pockets fitted tightly to her body to hide stolen credit sticks, jewelry, and other valuables she could procure. It wasn’t easy being a kid on the streets, but it was better than being a slave.

The market was crowded today. Old Lady Phapha was still selling her homemade “wishing bracelets.” Phapha called her over.

“What’ll it be today, deary?” she asked. Savrika looked around the market. The street was littered with neutral whites and greys, various shades of attunement to the force. Everyone was a part of it, and people’s actions dictated how much they stood out. His aura was bright red, and flecked with purple. Money, she thought, and not the good kind.

She pointed to the man.

“Ah,” she adjusted the microsocket over her eye. “You’re eyes are getting better, child. He doesn’t look like one of Baba’s men. Must be visiting.”

She turned to the target; but the women caught her small arm.

“Be careful, Sav,” she warned. “I heard there’s some Jedi on the loose. Wouldn’t to get caught up that mess.” Her seashuckle bracelets clicked as she rolled her cart away.

Jedi, down here? Her thoughts wandered to the last thing her parents said….then shook them from her brain. Focus, she was the best pick pocket in this ward; she wouldn’t let them down, and closed into his position.

“Oops,” she bumped into the man, knocking him to the floor.

“Watch it kid!” He dusted himself off and huffed away. She turned the corner into an alley way and looked at her hands. A pocket watch and a gold stick this–this’d be enough to buy the whole lot of them dinner for a week. She hummed a little down one alley to a fence.

His eyes were like coal and he wiped his face with his sleeve. He always shouldn’t be trusted, judging by his outward appearance. But Savrika’s eyes were still developing. She didn’t see his broken shoes, and shady lean. She saw that he actually cared about the children; and while he’d lie to any adult in the sector, he wouldn’t lie to her.

“As far as I know,” she shrugged, and took the money. It felt lighter than the watch, but dark silver.

“It’s all I got kid,” he apologized. “Al Baba’s men came by for some tracking drones. Who’d knew some jedi put this whole sector on high alert.”

There they were again, that word, Jedi. She thought about the force. The Jedi were said to be the strongest weilders. So if they were strong, all shed have to do was look for the biggest force she could feel, right? A big force, meant Jedi. And if not, well, she pocketed the credit stick, and headed to the rat’s den to change. She knew how to get out of trouble.

The Jedi finally escaping some semblance of crowd. They didn’t want to get people caught in their cross-fire, but the gangs didn’t seem to care. People screamed and shouted, and they just kept firing. After shaking the goons, the droids soon followed. Her hounds sniffing them out, and jumping to meet them, despite their acrobatic stunts, her droids kept pace.

They’d neared an alleyway, hoping to shake them by rooftop. But drawn light sabers, reflected blaster bolts, and destroyed pieces every where made for a messy escape route. They needed to cover their tracks. A small child sat on the corner, begging for credits. They barely noticed her as they walked into the alley. Not until one of the droids fell almost at her feet. She barely moved.

“Watch it, apprentice,” he spoke, and Savrika knew she had found them. “There’s a kid here.”

His aura was the strongest, and he kicked the head off the side into even further sectors below; then carefully lifted any remaining pieces from near her into a disposal nearby. Smart. His apprentice leaned against the opposite wall finally noticing her. She looked at him directly through her clothed wrapped eyes.

“You think she can hear us?”

“Look at her, Xuan,” his master walked towards her. “Do you really think we should worry?”

She looked up at the man. She could see his tired, gentle eyes and full greying beard. He was used to running, but preferred to stay still. His hands were worn like a factory’s workers. On the other side was his apprentice, a stronger force user, but whose hands itched for battle. Despite this, their auras were light.

“Ah,” he said. “A miraluka. How did you end up here?” The hum of drones was faint; they probably didn’t notice them.

The drones surrounded them, but no weapons–only cameras. Whoever they belonged to knew blasters wouldn’t do much. They didn’t want to kill the Jedi; they just wanted to see where they went next.

Xuan lept to his feet, drawing a lightsaber towards the girl. The aura around him licked with the dark side, but his heart was pure. She crawled away from him into the garbage. Her throat was too dry to yell wait but no sound came out. They were just Al Baba’s eyes and ears.

“Traitor!” He hissed, “Master, somehow she contacted them!”

“She’s just a girl, my apprentice,” he spoke. “And if she did contact them, she would be more powerful in the force than you could detect.” He looked at their options.

A fire scape, some barrels, and probably apartments eluded his mind. There wasn’t far they could go on foot. This alley way appeared to curve around the building, but from there, who knows where they’d end up; or if there was a way to a docking yard.

The drones’ camera lights flickered on and off, as to give warning should they try to run. He stared down at the girl. Barely audible over the street noise, the drones hummed and flickered lights with more alarm. It would only be moments before the real calvary arrived.

Xuan was not preparing for escape. He was ready to attack. He knew what the two of them were up against, but they had to make it to the new order. They had hid too long. The saber felt secure in his hands, even though he had no reason to use it.

“Let’s just get out of here and leave her be,” he spoke already heading towards the edge of the alley. His master knelt by the girl again. His master was too trusting. His master turned and looked at the scars on her knees and elbows.

“It looks like you’ve gotten into a tussle before,” he spoke softly. “With them?”

She stared at the drones then at her own scars. Any help she gave Al Baba would probably reward her rag-tag crew more than enough for months. Of all the days to switch look out.

She nodded at the Jedi.

“My apprentice and I need to escape, but won’t get far if these drones follow us,” he said.

She knew what he was going to ask. She didn’t want to help them, but she knew they were good. She was short on credits, and But she knew stolen money made better than blood money.

Savrika turned between the two.

Xuan held his lightsaber at the ready. He was prepared to fight. The Jedi master could see her heart weighing the options. She was stronger in the force than even she realized; he couldn’t help but wonder, how did she end up here?

She nodded. He didn’t deserve to die, not in some run down alley, not like she would. She scrambled upwards.

If you liked this work of fiction in no way related to Disney or its affiliates, be sure to share on twitter/instagram with me so I know you’ll want to read more.

The Perfect Cup Of Coffee