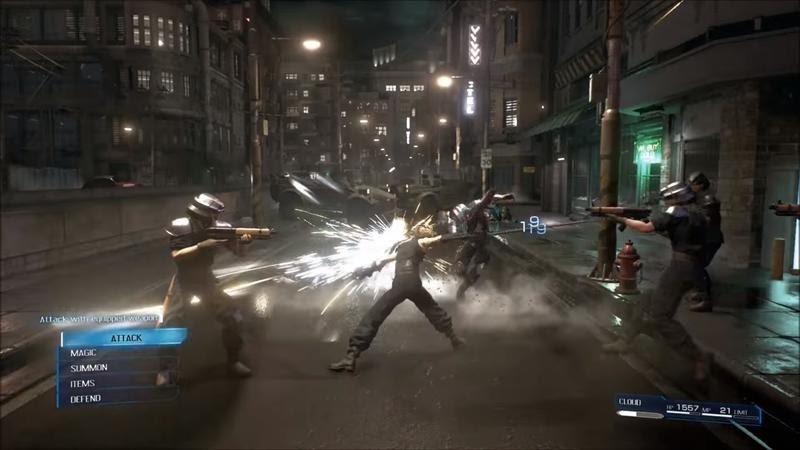 Final Fantasy VII is the game I always wanted to play all the way through at least once. Some of my fondest memories are sitting at my friend’s older brother’s console just to have the controller yanked from my hands and unable to finish any save or section. FFVII Remake can change all of that.

Here are the 3 things I’m looking out for when I play FFVII Remake.

FFFVII Remake is a turn-based strategy game with action style mechanics. This game design modernized it for an audience used to real time combat and twitch reactions (see every FPS game).  But it very much keeps its core roots of tactical gameplay.

FFVII’s original design allowed you to plan moves ahead, great. But if you didn’t plan far ahead enough, this design fell prey to the trap “I missed one step, and have to start the battle all over.” Deviating from the original turn-based strategy to incorporate more twitch gameplay is going to force me to change up my game with every fight.

#2 – Companionship in a Time of Crisis

So this is almost too relevant to the world right now. When I played the demo last E3, I knew the companions would be something special. Barret’s move set was critical to win the boss fight; and the banter had me hungry for more story. And with this 40 hour game of an original tenth of the story, I’m going to get it.

We need compassion and companionship  from our video games, now more than ever. Games where we’re heartless or isolating from others isn’t a game I want to play. I want rich companion dialogue, rich choices, and rich story rewards based on what I play. And without spoiling anything from pure speculation (because I am seriously in the dark as much as you readers are, assuming you haven’t played yet), I’ll leave my thought here:

I’m looking forward to making the Final Fantasy Remake my own.

it’s just like a good boss fight to make you think you know what you’re doing and then–whoosh! Sweep all that knowledge under the rug and start over. That’s what the E3 demo did; that’s what I’ve heard people who got review copies say; and that’s exactly what I want.

Boss fights can truly make or break everything you’ve learned about the game. Even more so in a game where it’s not just you attacking, but also your  team. I’m looking forward to how FFVII stands up against my different companions’ AI. Will they neatly handle the changing battlefield on their own? Or will I need to guide them every step of the way?

Only time will tell, and that time is coming soon…

No One Drives Well In A Crisis