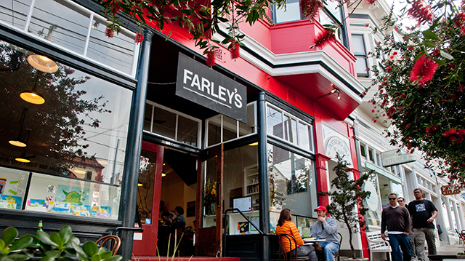 Farley’s knows who they are, why they exist, and how their café warms the hearts of all who step inside. It’s humble surroundings mixed with an incredible origin story makes me wonder if someone isn’t looking out for the place.

I wrote the very same thing that day when I walked through those doors. I’m ashamed I couldn’t find a better way to describe them as a writer, a former marketer, and PR girl. But their website tagline says it all:

Community, in a cup.

Stepping through the door

It’s a lazy Friday afternoon. When you step inside the entire space welcomes you. The large wooden table is currently empty, but the chestnut wood is the perfect backdrop for an instagram photo, so you sit yourself down. The largest table is right in the middle—the heart of the café. Magazine racks and bookshelves line the walls. Old journals with patron’s writings and drawings have “read me” written on their sides. There are binders and binders filled with stories, poetry, and children’s doodles. It feels like someone’s living room, and we were all just here to enjoy their company.

Two businessmen sit at a small wooden table with take away cups, talking about the latest venture on break. A couple students take up the slightly larger benches with white marble tables and just enough power for an iPhone or Mac. The round corner tables are filled with a language lesson, a teacher and two students. Papers neatly tucked into folders, and books stacked high on the table.At this point, the baristas noticed me. I moved to a marble table myself, to take some tripod photos of me drinking coffee.

They wait until I’m done, and ask me what I’m doing. I have to tell them. I started this coffee blog thing and I’m just touring—I’m a coffee tourist, ehck. They laugh, and look at each other. Did I know it was their anniversary? Looking around the shop, I see signs decorating and telling the story of Farley’s. It wasn’t part of the original décor? No, it was special, this week only, and I had a walked into a trove of history.

After the devastating earthquake of 1989, Farley’s became a refuge. Many people were out of power or had lost their homes. They had survived, but had no place to go. Farley’s became that place. Farley’s physical location is on bedrock, and while damaged, sustained enough to keep power and keep the coffee coming. Offering clean water, a restroom, and coffee, Farley’s helped build a community at a time when no one else could. Community in a cup; it meant something.

The people of Potrero Hill haven’t forgotten. It means something.

Farley’s was my first and last stop of the day. I could have stayed longer. Surrounded by coffee in a city that takes pride in coffee sourcing, Farley’s takes pride in its people, who serve an excellent cup of coffee.

Located off of 18th and Texas St. in San Francisco with another location in Oakland called Farley’s East. Pro tip: Parking off of 20th and walking down not only gives you the instagramable shots, but is also easy & free.